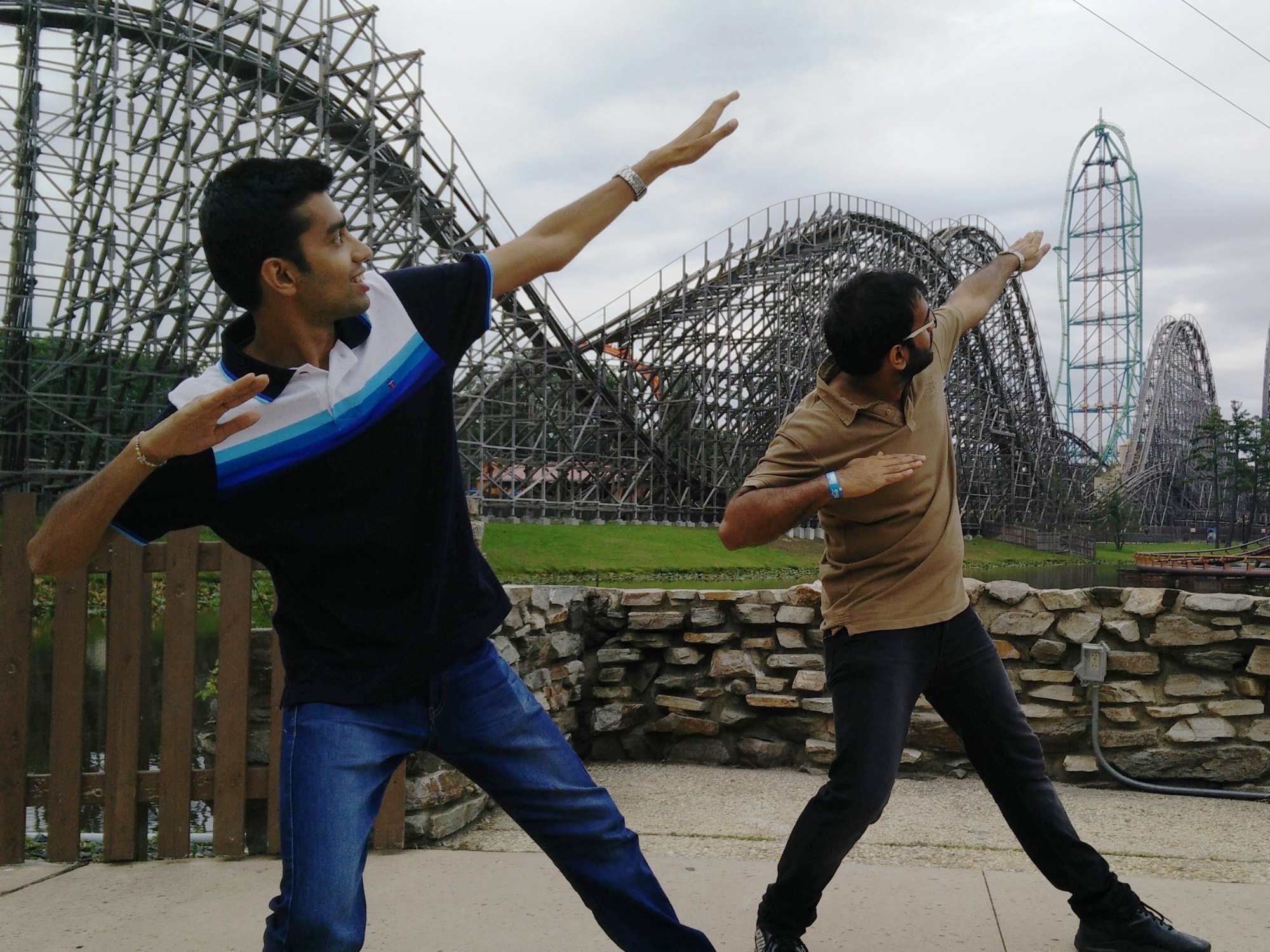 Then began a streak of rides on the amazing roller coasters. There was GREEN LANTERN, “wait, where are the seats on the car?” is what we asked the operator, “Sir, this is a stand up roller coaster”, “WHAT!?”

As a kid I was obsessed with the computer game – Roller Coaster Tycoon and wondered what it would be like to hop on the speedy coasters with 90 degree drops and corkscrews and vertical loops and helixes. Six Flags is the living version of the animated amusement parks from the computer game. All these years I used to confidently believe that roller coasters would never scare me; and then Six Flags Great Adventure happened. The amusement park offers the perfect blend of screams, thrill and elegance. There are a dozen roller coasters in the park and each one is different from others in more ways than one.

We were a group of 3 people and took the NJ Transit bus from Port Authority Bus Terminal, New York to Six Flags Great Adventure. They have dedicated busses that take passengers directly to the amusement park without any stops in between. They run enough busses so that no one is left behind; no pre-booking is required. We purchased a return journey ticket. Our busses left the terminus at 9 am and we reached the park at 10:30 am (opening time of the park).

Park entry tickets cost $69.99 onsite. The same is available online at a lower cost which is date-dependent ($44.99 – $64.99). The tickets were available online at $44.99 per person (10 August, 2015). After applying a coupon code (which was made available by a company for its advertisement and amusement park’s promotion) we finally purchased the tickets at $38.99 per person (excluding taxes). There are always some promo codes available and the discount varies depending on the season. I recommend googling for promo-codes prior to purchasing tickets online. Try the ‘COKE’ promo code, it usually works.

After entering the park we hurried towards the coveted Kingda Ka. As of September 2015 it is the tallest and the second fastest roller coaster of the world. I remember watching the construction of Kingda Ka on Discovery (or Nat Geo); never once had I imagined that one day I would get a chance to ride this coaster. And here I was. Although it is the tallest roller coaster but it’s all about the extreme acceleration which triggers the scream neurons in the brain to their highest frequency. The car reaches a top speed of over 200 km/h. This set the tone for the rest of our day.

Then began a streak of rides on the amazing roller coasters. There was GREEN LANTERN, “wait, where are the seats on the car?” is what we asked the operator, “Sir, this is a stand up roller coaster”, “WHAT!?”, and then we experienced the body visor takes its position as if putting on the Iron Man suit and the coaster took off, there was SUPERMAN, which makes you feel that you are flying like the super hero and your arm reflexively throws itself forward lead by a clenched fist to imitate his iconic posture, and BATMAN – this was beyond imagination, what better way to keep the tracks mysterious than to ride backwards, up next was DARK KNIGHT, Gotham comes to life when Harvey Dent attempts to reassure our safety but his voice is faded away by the evil laugh of the Joker and the coaster glides along the metro tracks of Gotham city, SKULL MOUNTAIN takes you into an even darker journey into the labyrinth of universe where all you see is darkness and never know what is coming your way. But the king of all rides was EL TORO – an old, creaky looking wooden roller coaster which demands to be hopped on multiple times. I would rate it 10 out of 10 in terms of efficiency – without getting into the complicacies of vertical loops and corkscrews, it establishes it’s supremacy to be the most thrilling and enjoyable ride of the day.

We wanted a good group photo to be clicked while on EL TORO, so we planned to give a ‘thumbs up’ with a wink (Barney Stinson style). We located the camera position on the ride and prepped ourselves to pose at the right moment. The photograph speaks for itself. We were so happy to see our perfect pose that we spent $30 to buy an e-copy of the picture. We also got on the LOG FLUME and CONGO RAPIDS both of which were unexpectedly exciting. Be warned that there is a high chance of you getting completely wet on these rides although there are drying areas (chargeable) inside the park so you need not carry extra set of clothes. HOUDINI’S GREAT ESCAPE is a good illusion and I would definitely recommend it. As a group of engineers we had a good discussion on demystifying the illusion after the ride.

There is also an anti-vomit ice cream store in the park for those people who easily get nauseous. There are locker hubs at a dozen places inside the park. $1 would give you access to a locker for 2 hours. The best way would be to buy an all day access (valid for 8 hours) which costs $8 and allows you to switch lockers from one site to another multiple times. An unlimited re-fill soft drink bottle was also available for about $15.

Six Flags Great Adventure is a fantasy world in itself; it takes you in and enchants you with the tales of super heroes and also makes you feel one. Although it’s just not possible to get enough of the park in a single day but one day is enough for Six Flags to give you some of the most thrilling moments of your life.

SHOULD YOU BUY A FLASH PASS?

Absolutely! Don’t even think twice. To decide which Flash Pass to buy, first understand how the flash pass works.

There are two entry points to a ride – the regular entry and Flash Pass entry. Flash Pass holders are allowed to queue up to the front of the line. But they can enter through the ‘Flash Pass gate’ only if they have virtually queued up on their Flash Pass device long enough. Take 4 people for instance – Adam (has a Platinum Flash Pass), Barbara (has a Gold Flash Pass), Cindy (has a regular Flash Pass) and Dave (hard luck). To enjoy a certain roller coaster, Dave lines up through the regular entry and the queue is so long that it would take 1 hour before his turn. At the same time Adam, Barbara and Cindy virtually queue up for the ride using their Flash Pass device. They need not stand in the queue and can roam around and enjoy other rides before their turn comes. Cindy would be allowed to enter through the Flash Pass gate after an hour, Barbara after half an hour and Adam within 6 minutes. 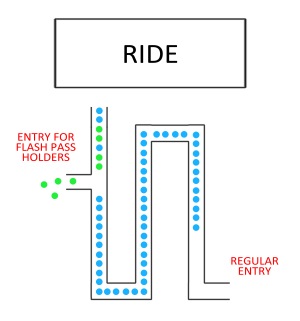 So with a Flash Pass you need not waste your time standing in long queues (some rides make people stand for 2-3 hours in the queue) plus it reduces the wait time drastically. We had purchased a Gold Flash Pass and it was a great buy. As soon as we entered a ride, we would queue up for another ride on our device. Which pass to buy – it definitely depends on the number of people visiting the park. We had visited the park during summer vacations and on a Monday (10 August, 2015) and the regular queue time for many roller coasters was 1-2 hours. I would definitely recommend the Gold Flash Pass. We never had to ‘wait’ for more than 15 minutes for a ride.

We spent about 11 hours in the park and enjoyed almost all the roller coasters, also went twice on some rides. NJ Transit runs return trips from Six Flags Great Adventure to New York. Their last bus departs between 8:30-9:30 pm depending on the season. The reassuring words of the onsite manager are enough to soothe your worries – “We don’t leave a single soul behind.”

3 thoughts on “SIX FLAGS – home to the best roller coasters”