With a goal to cover the two cities of Bern and St. Gallen in a day, I started off early to catch my train from Brugg station on the of May, 2014. It wasn’t the wisest decision to cover these over a single day, for one was far east while the other was far west from my place of stay. Anyways, the mere fascination of one of my first solo-european-excursion overpowered my nascent planning acumen and I headed to Bern, the capital city of Switzerland.

Surrounded on three sides by Aare river, the historic Old city of Berne is a World Heritage Site. The distinct medieval character of the old city is bound to catch your attention, right after you step out of the station. Like many european cities this city also offers a walking tour, the map for which can be easily obtained from the tourist office. 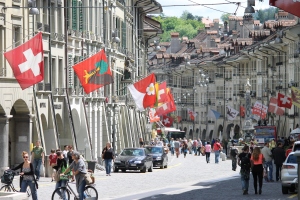 Of the many medieval architectural buildings present in Berne, the significant ones which interested me were – the famous clock-tower Zytglogge, the Parliament Building and the Cathedral. The walking tours begins along the Marktgasse (or the market street) which offers a perfect blend of medieval and modern times with the modern-day trams circuiting beneath the watch towers and the beside the beautiful fountains. The city of Bern has over 100 public fountains, each crowned with a different statue.

The clock-tower used to serve as a guard tower for the city of Berne in medieval times. Apart from its architectural beauty and the magnificent astronomical clock, the hourly bell-striking of jacquemart is quite a sight. And if you’re lucky (as I was :)), you get to witness the whole procession when the clock ticks twelve.

Of course for me, the main attraction of Bern was the second floor of Kramgasse No. 49, former residence of Albert Einstein. Having been a resident of this place from 1903 to 1905, it was in this very house that he worked on the Annus mirabilis papers. The site now is open for public as serves as Einstein museum. The second floor has been renovated and restored so as to the reflect the time when Einstein resided there. In addition to this, the presentation on the third floor offers some glimpse into Einstein’s live back then. The entry ticket for the museum can be obtained for a payment of 4.5 CHF (yes, I got a student discount!). 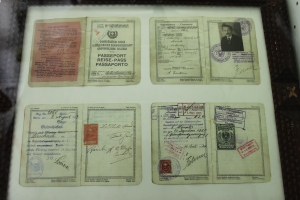 The walking tour along the stone streets of the old city lets you explore Bern contently in the limitation of time. In case you aren’t travelling alone and have sufficient time at your luxury, the walking tour can be easily combined with some fun-filled treasure hunts. With riddles and hints at various checkpoints on the walking tour, you can learn and familiarise yourself with some interesting facts about the city.

After meandering around the old city of Berne, it was time for me to move to my next destination of the day, St. Gallen. This city was enlisted in my itinerary for the famous Abbey of St. Gallen. Founded in 8th century, the Cathedral of St. Gallen is an impressive building enclosed by a lush green garden complex. The interiors of the Cathedral exemplify a Baroque style design. Apart from the cathedral complex, the Abbey also houses a library. The Abbey Library of St. Gallen is one of the most beautiful room of its kind and is home to one of the richest collection of medieval books. After a satisfying exploration of the surrounding area, I strolled in the market of St. Gallen for a while before catching my return train to Brugg.